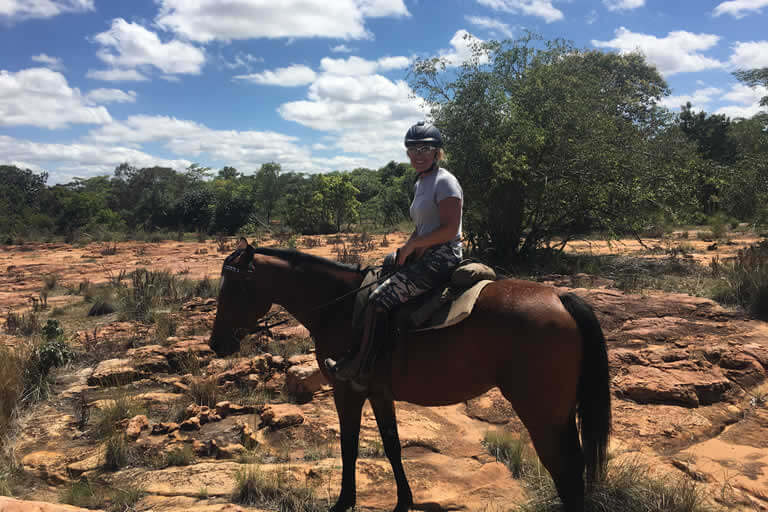 Some interesting information about this huge state is available at: (http://www.atacama.it/sud_africa_informazioni.htm) 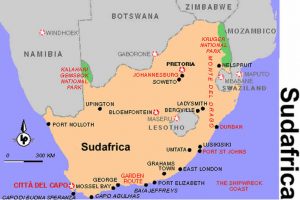 The Republic of South Africa is the southernmost country of Africa, and is surrounded by the waters of two oceans: Indian to the east, and Atlantic to the west. It extends over 1,223,226 square kilometers, an area equal the sum of Italy, France, Germany, Holland, and Belgium (about four and a half times bigger than Italy). South Africa is divided into 9 provinces: Gauteng, North-West, Limpopo, Mpumalanga, KwaZulu-Natal, Free State, Western Cape, Eastern Cape and Northern Cape. Few countries in the world can compete with it in terms of beauty and variety of landscapes. It offers such and so many natural scenarios, together a receptivity of high international standards and a thousand of pleasant surprises for the demanding and scrupulous tourist, whose discovery will prove to exceed all expectations. South Africa has a population of 47 million, of which 35 million are black (mainly Zulu and Xhosa), 7 million are white, 2 million are mixed, and 1 million are Indians.

I get on the plane with all my luggage, ready for this long and adventurous horse trekking in the private reserves.

SOUTH AFRICA, a thousand of intertwining thoughts in my mind: the story of Mandela and the Apartheid, diamonds, gold, platinum, summer, sea, city, parks, animals, jeep safari, safari on horseback…how will it be? What does it mean to end up in front of or near free animals? I do not know, I try to imagine, and only the idea of living this wonderful feeling fills me with joy and thrill.

At 10.00 am in the next morning, I was in Johannesburg, where I stayed for one night, both for a rest and for a short visit of the city, because I do not know it. 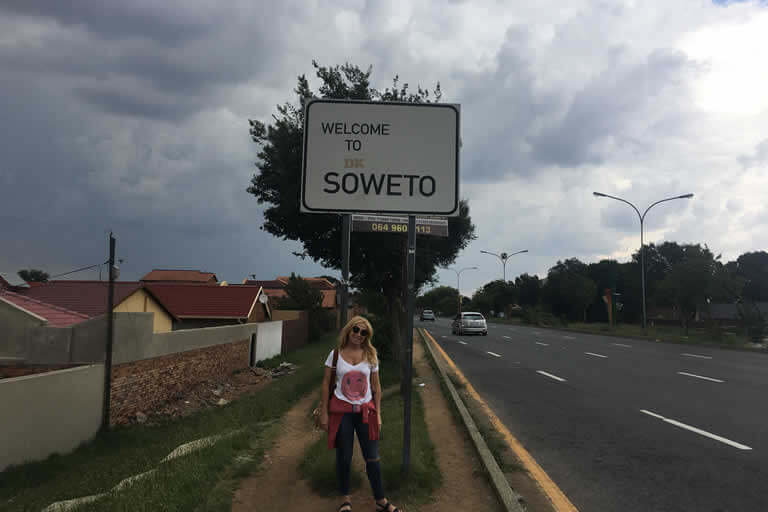 In the afternoon, it started my guided tour at SOWETO, the most interesting urban area of the city, as it is the largest “township” of South Africa. In fact, it has played a key role in the history of the apartheid.

Alle sette della mattina seguente, mi vengono a prendere per andare nel Lodge dove sono i cavalli, situato a 300 km a Nord di Johannesburg.At 7.00 am in the following morning, they pick me up to go to the Lodge where the horses are, lied at 300 km north of Johannesburg.

I arrived a little confused and in the same time enraptured by what surrounds me: beautiful, free horses, exactly 91, of various races – including thoroughbreds, Arabs, Boerperds, Appaloosa and crossbreeds; young boys and girls, both local and foreigners, working and smiling, getting the horses ready for the guests. I see a lake in front of me where every now and then a hippopotamus rests, a beautiful bungalow, a well-kept garden, and the smile of Lora and Shane who manage this wonderful place.

What to expect more? I would say nothing, just some information about the whole organization, immediately given by Kristy along with an excellent cup of coffee.

I entered my beautiful bungalow in front of the lake, in the middle of the garden, with the horses that keep me company.

I settled down and got ready for my first horse trekking…a mystery because at that moment I did not know anything yet.

I know my fellow adventurers, a Swedish couple, a New Zealander lady, two English girls, an Austrian girl, and a Swiss lady, the guide with her English girl assistant who is there for three months of volunteering.

Ready horses, assigned according to the level of riding of the participants. We saddled and went to ride.

Emotions? A thousand. – Curiosity? A lot.

We proceeded as a group at the walk gait, admiring the landscape around us, and hoping to see something moving among the bushes, listening to the coming and rustling sounds, any scent that made us to sense the presence of some animal in close proximity.

We were really lucky! The guide stopped and required silence: three giraffes were in front of us. The horses were quiet, the photo chase was normal, each of us between cell phones and cameras tries to catch this incredible moment, not only in mind but also with inestimable photos.

The first excitement of the day marking the beginning of this horse trekking in a South African reserve. Being among free animals on a saddle is a must, words cannot go so far to describe what you really can live.

We were all happy but guide was more than we were.

We proceeded our horse trekking in these magical places. We alternated the walk gait with the gallop, wherever possible, to bring out the rider deep inside of us!

We arrived in front of a huge hole in the ground, we stopped and the guide explained that a python of 3 meters gave birth to its young but after a few days the female python leaved and they had to learn and grew alone.

We rode with our horses among meadows and woods, paths in the middle of the savannah …

We chatted, laughed, joked … and then we set out for the Lodge to accommodate the horses: after having removed the saddle, we had a nice shower, since the temperature is around 30°C, and then enjoy yourself freely in 20 hectares of land and have fun with the others.

A good thirst-quenching drink, a chat and then relax and shower preparing for the dinner.

The dinner is truly sublime convivial evenings are very nice: we know each other, we relate to a very nice and comfortable environment.

After an excellent sleep, the light entered the room very early, it was dawning at 5.30 am, the colors are beautiful and looking to the rising sun is wonderful, mainly if you come from a country of cold winters.

Breakfast was almost ready, I went in the middle of the horses, already saddled and ready for the morning walk. I read the name of the horse assigned to me and I went to meet it.

After a good breakfast, everyone was ready to start the horse trekking

Our group is made up of about 8 people and our guide, Shane, is the manager of the lodge

We usually started hoping to meet many animals and experiencing great emotions.

The horses were beautiful, accustomed to these clumsy faces of riders …, we crossed fields of which one was full of zebras, running, playing, and fighting. We arrived at a lake where we stopped for a deserved rest.

We chatted, and discussed about the snakes … how beautiful, each of us with their own experiences and ways of thinking. What’s better than a good drink?

We return to the Lodge earlier than expected because a surprise awaits us. 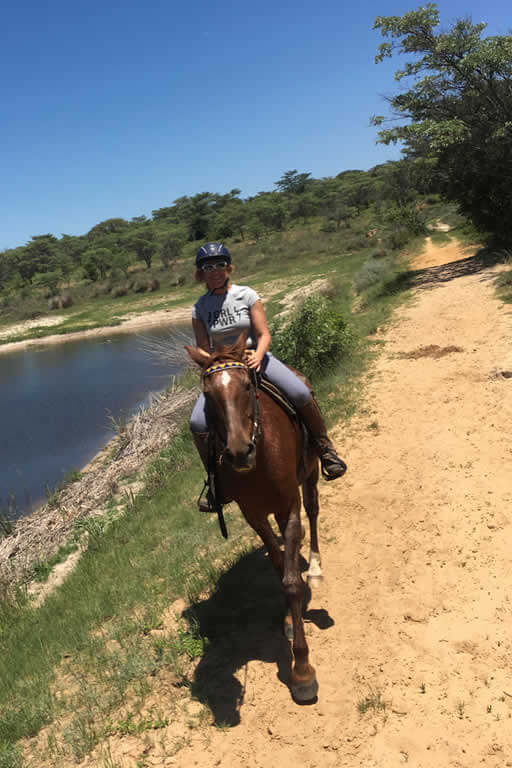 They invited us to go and wear something different.

MAGIC MOMENT:  THE BATH WITH HORSES!

We were all enthusiastic, ready, we manage our horses only with the reins; the saddle has been removed, and slowly we climbed slowly and headed towards the pond. We followed the advice of the guide, and as we approached the water, our expectations about our horses come to light: will it come in? Will it swim? Will I bathe in the pond? We were smiling and happy for this new experience!

What a spectacular experience!!!!

We returned to the Lodge for a nice shower, a swim in the pool, and then we had a good lunch.

In the afternoon: another surprise!

We all were ready in the meadow in front of the pond. The guide brought us some rather strange rackets, which I never saw before. We will play “horse pole” … I had no idea what it was. We looked to each other, we played and tried to catch the ball with these strange rackets on the grass …. There was a lot of fun because we started to think about when we had to do the same thing on the saddle of the galloping horse !!!

Good! The horses are assigned and we entered the playing field!

It took about half an hour to understand the rules of the game … we comprehended that a team has three players. We were ready and I had the number 2, so I should have stayed in the central part of the field and defended the number 1, who should try to throw the ball with the racket beyond the opponent team’s goal line. (I felt like Harry Potter)

Confusion, game, fun, tumbles from the horse, but we didn’t give up … or rather, more we played more we understood what we had to do and we created more “competition” .. Beautiful experience!

Every day was a surprise …. And the fun was not missing!

Every morning we prepared ourselves hoping to see as many animals as possible, in the midst of horse trekking and galloping in this savannah, sometimes bare and sometimes full of shrubs to which we had to pay attention for not being hit in the head.

We enjoy the New Year’s Eve with bonfires, dinner, music, joy and sharing.

My experience in this Lodge came to end as I went to the truest savannah, another place where would be almost nothing, only nature, tents and silence. 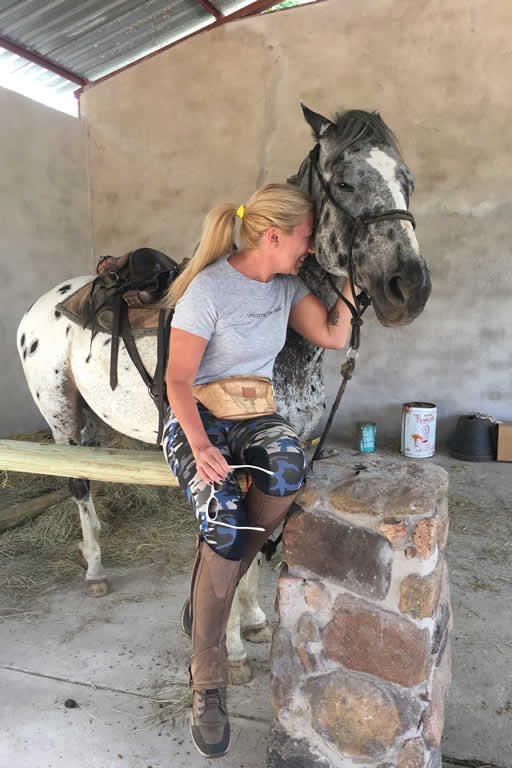 I was more than ready!!! 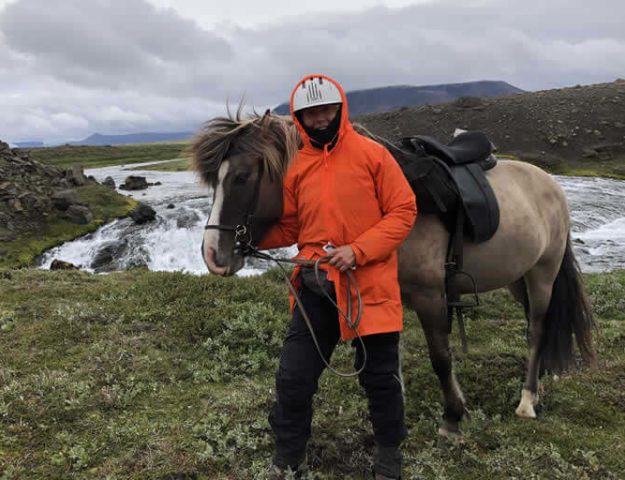